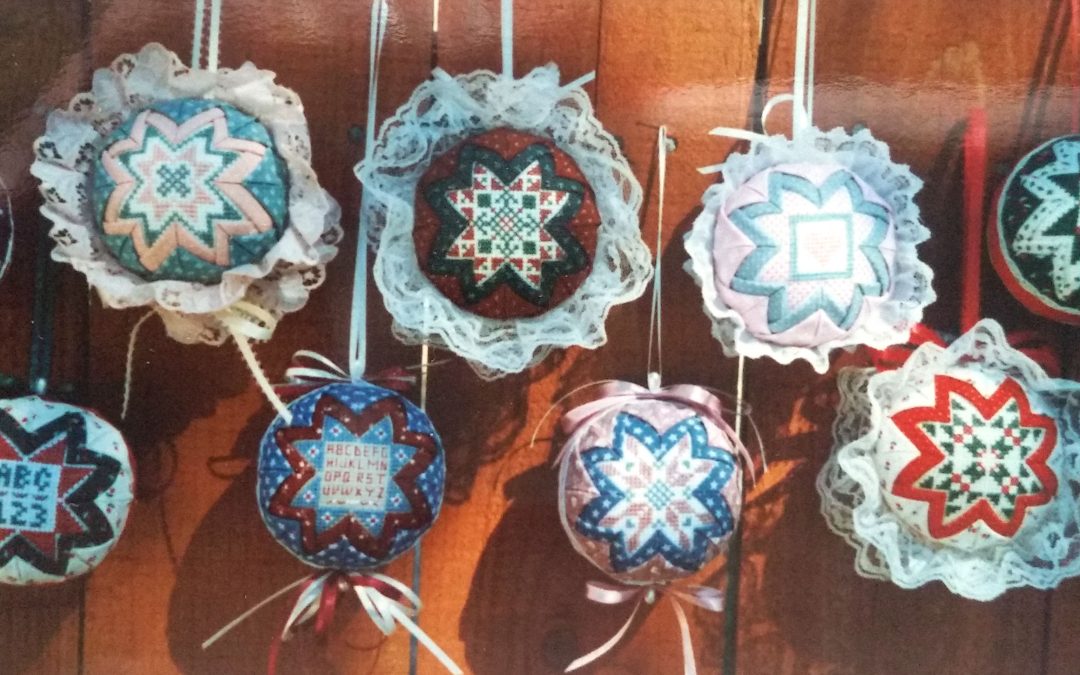 I always loved the old fashioned folded star ornaments. I hated them too. Making the first side is easy. The hard part is getting the opposite side to line up correctly & always was a gamble I never seemed to win.

In 1987, I moved from Warren, Michigan to Ramona, California. My son was two years old and there was little extra money for Christmas gifts the following year. But as a quilter & stitcher, I had plenty of scraps and just enough money to buy a pack of nine 3 inch styrafoam balls to make folded star ornaments as gifts. When all the ornaments were made, I was sad about one gift. I always gave something with a pig on it to add to the collection of a cousin who collected all things piggy. I couldn’t afford the cute pig fabric, so I cross stitched a little piglet to make something different for her. But the cost of making something different was not in the budget. What if I could plop the cross stitched pig onto one of the folded start ornaments? Easy, right? No, it wasn’t.

No matter what, just slapping the pig on the ornament didn’t work. But I have an extremely stubborn streak & don’t give up easily. After taking measurements, pulling out some old math books, and a lot of trial and error, I not only got the pig on her ornament, but got the idea to make the all sorts of ornaments using cross stitch fabric for the centers.

I had to dig deeper into the math books and until then, never thought that the expression “pi r squared” or the Theorems of Pythagoras would ever be a useful part of my life. They became very important. Using math, and a hefty dose of determining what didn’t work, I had something. I figured out that by using two  exactly cut 14 count aida cloth squares, then placing them on opposite sides of a 3 inch ball base, they lined up just as the math equations said they would.  Then, using the aida cloth squares with the designs to determine where to pin & place quilting fabric, both both sides of folded star ornaments lined up perfectly, every single time. Score!

There must be a craft book out there that had instructions on how to do this, I thought. I soon found out that there wasn’t. Hmmmm… 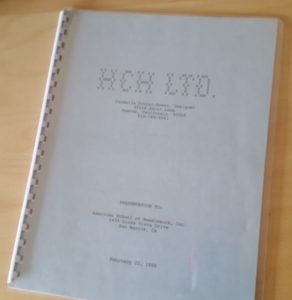 Being broke is a good thing.  It means you have nothing to lose. What if I had created something new, and maybe other quilters & stitchers might want to do what I had figured out?  I mustered all my courage and called the offices of American School of Needlework, which happened to be located just north of San Diego in San Marcos. “Hello, I’m just a mom & a nobody.  I have a really good idea that you might want to publish.” Naive? You bet! But an appointment was made, I put a basketfull of my ornaments together, wrote a proposal, got a babysitter and showed up on time. The picture on the top of this page was of my first ornaments & part of my presentation.

The result? They loved my folded star ornaments with cross stitch centers. No, it had never been done before.  Gosh, I really did create something new – how about that?!

Easy Cross Stitch Folded Star Ornaments was produced by ASN Publishing in 1989. They printed 100,000 copies & the book sold worldwide.  And yes, it was a big deal to see a craft book with my name on it on the sales racks at craft stores.  Back in the day, it even sold at the BIG stores such as Walmart, Target & JoAnne’s in their craft book departments.

All these years later, it’s still a big deal for me. Guess sometimes you just have to have a little faith in yourself, your ideas & abilities. As an example, way back then I never thought I’d be able to create this web site.  I’m just a mom & a nobody, right?  Well, no.  If you want to do something, you just have to figure it out, add a dose of courage, and see what YOU can do. Simple! 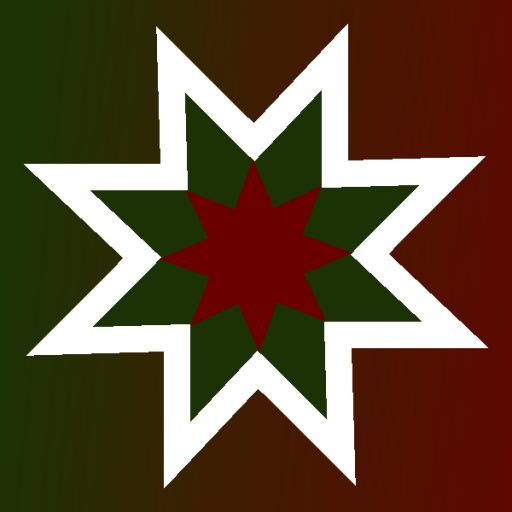 Absolutely free!  Filled with tips & tricks of what we know, hacks & shortcuts to help you make Folded Star Ornaments. Get our Updates directly via Email. Sign up today!

By clicking our Subscribe button, you consent to allowing us to store & use personal information to get in touch with you.

You have sucessfully signed up for our Updates! Thank you!